Well, what an adventure that was! Rog Davis, Bart Kuijten, Sean Bird and I actually managed to cycle 500km in 24 hours –  or in 23 hours 15 minutes to be precise. Can’t really believe it!

At 12:30 pm on Friday, we were waved off by the Mayor of Newbury, a group from Eight Bells for Mental Health Newbury, and family and friends. It was all going smoothly until almost the end of the first 100km lap… A big lorry got too close to me for comfort so I thought I’d use a dropped kerb to get onto the pavement but it wasn’t dropped enough and it (the kerb) knocked me off my bike… Luckily only a couple of bruises and grazes and no real harm done.

And then only 10km into the second lap I momentarily lost concentration and my front wheel touched Rog’s back wheel and I went over again and was just missed by a car, but, unfortunately for Sean, he hit me. I got a couple more bruises and scrapes on the other side, and Sean hurt his wrists in the fall. And somehow Bart’s rear wheel was wrecked in the process. Luckily Catie Colston was quickly on hand with a spare bike and the show went on, but now 45 minutes behind schedule…

We had amazing support from Irwin Fairclough who rode on the front for way more than his fair share for the first two laps, and the final lap too – so a mere 300km for him! Ever so many thanks. Also on the first lap to support were Mick Berkhout and Darren Batten – thank you, guys!

We were lifted by the cheers from Sara Kuijten and kids and friends as we came into Thatcham on both of the first 2 laps – it may seem a little thing, but it made a real difference.

The third lap started as night was falling and was the only one where it was just the four of us. It was eerily quiet and, obviously, pitch dark out on the small roads, but that was part of the adventure. And we worked really well as a team taking 5-minute turn on the front like clockwork for 4 and a 1/4 hours.

We came in after the 3rd lap at 2:30 am and were met by James CM Anderson who proceeded to lead us around the 4th lap. And he’s got a young baby! What a star! And as the sun rose we got to see a couple of barn owls, a badger and a whole herd of deer; and a lovely sky.

The last 50km of the 4th lap were really, really hard. We knew we still had another lap to go and were all already feeling exhausted and sore.

But breakfast, sunlight and the knowledge that this was the final lap seemed to reinvigorate us, so the first 25km seemed to fly by. But we were struggling somewhat and it felt like we were going slower and slower. However we had Irwin back helping us, Scott Nicholls, and Mick Berkhout were also back after helping on the first lap too, and Mick brought in reinforcements from Runners who Ride. Thank you all.

We realised with about 60km to go that we were going to make it well inside the 24 hours which was a relief, but still a bit of a battle to finish it off. And finish it we did. Only we were just past there and still had to ride 15km back to Newbury..!!! So in the end we’d ridden 515km by the time we rolled back to the Friends Meeting House where we’d started. And we had a proper welcoming party too, with the Kuijten family, Ju Davis and a few more – that was fab!

Exhausted and sore, but both amazed and proud that we all managed to complete our challenge. Especially satisfying as we had no idea whether we would be able to go that far or not.

And at the same time as having a great adventure, we managed to raise £1,640 (so far) for Eight Bells for Mental Health Newbury. Many thanks to all of you who have generously supported us. And if you haven’t yet, but would like to, please use the link at the top of this page.

Thank you to everyone who supported Martin and his friends and to all you kind people that have donated.

The Story Behind the 500km in 24 hours Cycle Ride.

Starting at noon on Friday 15th July four intrepid, some would say plain bonkers, friends from Newbury will attempt to ride 500km (300 miles) in 24 hours in aid of Eight Bells for Mental Health. The four – Sean Bird, Martin Colston, Rog Davis and Bart Kuijten – all met through Team Kennet Triathlon and have raced together for many years. Last year they challenged themselves to ride the fearsome Dragon Devil ride in the Brecon Beacons: 300km (190 miles) with 5,000m of climbing, and they had no idea whether they would be able to make it. In the end, they completed the course after 15 hours (including meal stops) and all thought that was as crazy as it got.

With not enough to do during all the Covid restrictions around Christmas, Rog started wondering… If we managed 300km in 15 hours, could we manage 500km in 24 hours? And the rest of us immediately said we’d love to give it a go. Over the last 6 months, we’ve all been training hard. Rog and Martin recently spent 4 days cycling in the French Alps, covering over 400km and climbing a total of over 9,000m. Meanwhile, Bart and Sean have been testing themselves running and in June they each completed the South Downs Way 100-mile race in 20 and 26 hours respectively, which is quite amazing. So between the four of them, they’ve cycled a lot and experienced pushing on through the night, but none have yet done all those things on a bike.

It’s hard to visualise quite how far 500km is, so maybe this map will help. It shows a circle with a radius of 500km / 300 miles from Newbury. So it could take you to Scotland, Ireland, Wales, Northern Ireland, Ireland, France, Belgium or the Netherlands. And if you stretched it to 520km you could get to Edinburgh, Luxembourg or Germany. It’s a looooong way! 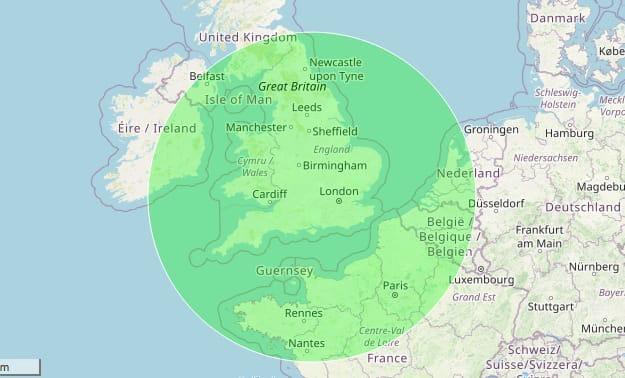 Clearly, it’s a huge physical challenge to ride 500km in 24 hours, but the real battle will be a mental one. We have a 100km loop starting and finishing in Newbury and going through Lambourn, Ashbury, Wantage, Upton, Streatley, Pangbourne, Woolhampton and Thatcham; with each loop involving 870m of climbing. After each loop, there will be a short pit stop to eat, refill with energy drinks and food to eat on the next loop, stretch etc before heading out again. We will get more fatigued, more tired and more uncomfortable with each successive lap and the temptation to call it quits at the end of laps 3 and 4 will be hard to resist. And lap three and half of lap four will be in the dark.

The mental challenge makes our chosen charity – Eight Bells for Mental Health – really appropriate. It is also one of the Mayor’s charities for this year, so we’re delighted that we will be waved off on our way by the Mayor from the Friends Meeting House where Eight Bells meet on a Friday. Covid and now the cost of living crisis are putting more and more people under huge stress and the need for mental health support has never been greater. Martin knows from personal experience of clinical depression back in the late 1990s how important effective treatment and support are, and so this is a cause close to his heart.

If you would like to sponsor Bart, Martin, Rog and Sean, then please follow the link at the top of this page to the Mayors’ Benevolent Fund where your donation will be generously matched by The Good Exchange.